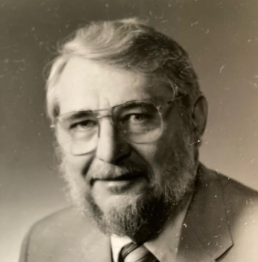 Ted was born in Middletown on January 21, 1935 to Merlo and Eleanor Laverty. Upon his graduation from high school in 1952, he joined the Air Force where he was trained in aircraft mechanics and sent to Japan. In later years, he enjoyed recalling details of his Air Force years and sharing his military photos with his family. In 1956 his career began at Bell Telephone Company, for whom he worked until his retirement in 1993. His career began as an installer, and it was in this role that he first met Jackie, one of the dispatchers who assigned repair jobs to the installers; they knew right away it was meant to be. Ted and Jackie started their married life August 30, 1957 and just celebrated their 65th wedding anniversary this year.

Ted had many interests which included crafting, reading, watching baseball, traveling, and participating in church life. A skilled craftsman, he worked with wood to make many decorations and heirlooms. His love of all things military can be seen by models in his office as well as his many books and magazines related to the American wars, particularly the Civil War. Watching and attending baseball games for both the Reading Phillies and the Philadelphia Phillies were important parts of his life; he and Jackie even traveled to Clearwater, Florida many times to watch pre-season training. A few other destination adventures included a fantastic family trip to Disney in 1972, many summer vacations made with his grandchildren including to southern beaches, and road trips with Jackie to South Dakota’s Mount Rushmore, Tennessee’s country music belt, and Niagara Falls. Having been raised in the church, Ted found church membership to be a way of life and was an active member at St. Thomas Episcopal Church in Morgantown for many years.

This devoted, kind, and gentle man is survived by his wife, Jackie; daughter Vicki Lynn Trego, wife of Kenneth “Andy” Trego; daughter Cheryl Ann Johnston, wife of Stanley Johnston; and son Theodore “Ted” R. Laverty, Jr., husband of Diane Laverty. Also surviving are ten grandchildren and nineteen great-grandchildren who consider themselves blessed to have had “P-pop” in their lives.

A memorial service will be held at a later date. Groff High Funeral Home in New Holland is entrusted with the funeral arrangements.