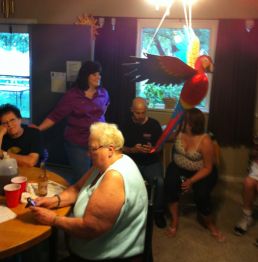 Born in Pottstown, she was the daughter of the late Harry and Jenny (Horn) Fillman.

Roseann was a well-known business owner in the Morgantown/Elverson area. She attended Morgantown Community Church. She was the founder of the Morgantown Area Business Association and was instrumental to the development of the Elverson Halloween Parade.

She was heavily involved in the community often referred to as the unofficial Mayor of Morgantown. If there was an event, she was involved. She knew everyone and everyone knew her.

A memorial service will be held on Saturday, March 26, 2022, at 11 a.m. at the Morgantown Community Church, 4221 Main St., Elverson. The family will receive friends at the church one hour prior to the service. In lieu of flowers, memorials may be sent to the Animal Rescue League of Berks County, 58 Kennel Rd, Birdsboro, PA 19508. The Groff-High Funeral Home, New Holland is in charge of arrangements. Online condolences may be posted at www.groffeckenroth.com.