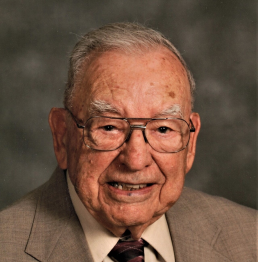 Ralph L. Auker, 98, formerly of New Holland, passed away on November 13, 2022 at Wellspan Ephrata Hospital.
Born in Elizabeth Township, he was the son of the late Harry and Fannie (Dunmoyer) Auker.
He was the loving husband of the late Mary K. (Good) Auker, with whom he married on December 8, 1945 and shared sixty two years of marriage until the time of her passing on June 16, 2008.
He was a member of Weaverland Anabaptist Faith Community Church and was employed by the former Martin Limestone for forty-four years as a truck driver and part time for five years as a shop courier, until his retirement in 1991. He was a member of Stony Brook Hunting Camp in Lycoming County and he enjoyed taking drives around the town, watching the hockey games every Saturday night, watching the Phillies and completing puzzles.
Ralph is survived by his daughter: Trudy wife of Richard M. Weaver of Ephrata, his daughter in law: Dorothy (Musser) Auker of New Holland, grandchildren: Amy Auker wife of Matthew Snyder, Marjorie wife of Nathan Rutkowski, Chad Weaver, Kristi wife of Chad Priddy, Charles Eckenroth and Christopher Eckenroth, eight great grandchildren and one great great grandchild.
In addition to his wife and parents, he is predeceased by his son: Barry Auker.
A funeral service will be held on Thursday, November 17, 2022 at 11:00 AM at Weaverland Anabaptist Faith Community Church, 210 Weaverland Valley Road, East Earl PA 17519. There will be a viewing held for one hour prior to the time of service. Burial will be held in the adjoining church cemetery.
Groff High Funeral Home in New Holland is entrusted with the funeral arrangements.