Obituary for Paul B. Hessemer 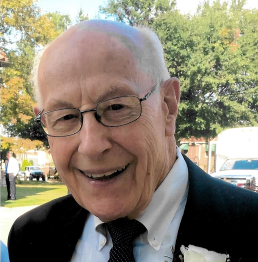 Paul B. Hessemer, 97, of New Holland, passed away peacefully on November 2, 2022 at Wellspan Ephrata Hospital, after a short illness.
Born in Wyomissing on March 10,1925, he was the son of the late Paul and Marie (Metzler) Hessemer.
He was the loving husband of Nancy H. (Heistand) Hessemer, whom he married on June 4, 1949. Together they shared 66 years or marriage until her passing on March 23, 2016.
After graduation from Wyomissing High School, he joined the US Army and served in the 75th Division, seeing action during the Battle of the Bulge. He continued to attend 75th Division reunions well into his 90's.
After discharge from the Army, Paul attended Johns Hopkins University, graduating in 1949 with a degree in Electrical Engineering. Paul and Nancy lived in Lynn, MA, Secane PA and Springfield, PA while he was employed by General Electric. In 1978, Paul took a position with Delta Controls in Stockton, CA. They enjoyed many happy years in Stockton, and after Paul’s retirement, returned to Pennsylvania in 1993 settling in Chadds Ford, PA, where Paul volunteered at St. John's Church, and Longwood Gardens.
In 2008, they moved to Garden Spot Village where he continued his volunteerism as a member of the Vestry at Bangor Episcopal Church, the woodworking shop at Garden Spot, and as a visitor to friends and neighbors receiving care in the Assisted Living and Nursing households. He enjoyed taking his great grandchildren to the train room during the Christmas seasons.
Paul was a man of faith and a devoted family man. He enjoyed puzzles, loved classical and big band music, and was a student of Lincoln-era history. He is survived by his 4 daughters: Pamela Givens, Amy Carr (John), Barbara Speer (Steve), and Rebecca Owston (Greg Puhr). Also surviving are ten grandchildren and eight great grandchildren. In addition to his wife and parents, he is predeceased by his brother: Fritz Hessemer and his sister: Marianne Gunther.
A memorial service will be held on Friday November 11, 2022 at 11:00 AM at Bangor Episcopal Church, 2099 Main Street, Narvon PA 17555. There will be a time of visitation held from 10:30 AM to 11:00 AM in the church house on Friday. Interment will be private.
In lieu of flowers, memorial contributions may be made to the Garden Spot Benevolent Fund, 433 S Kinzer Avenue, New Holland PA 17557.
Groff High Funeral Home in New Holland is entrusted with the funeral arrangements.