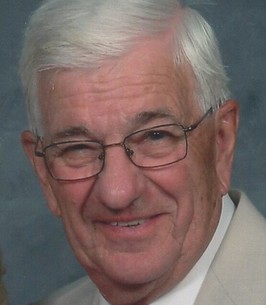 God saw you getting tired,
And a cure was not to be,
So, he put his arms around you,
And whispered, “Come to me.”

A golden heart stopped beating,
Hard working hands at rest ,
You will always be dearly remembered,
You simply were the best.


John (Jack) M. Edwards, a resident of Garden Spot Village, New Holland, passed away peacefully into the arms of Jesus on Tuesday, February 8, 2022 at the age of 94.
He was the loving husband and partner in crime of the late Norleen Ohlinger Edwards who passed in 2019. Born August 13th 1927 in Churchtown, he was the son of the late Samuel P. and Edna Martin Edwards.
John retired from CNH in 1986 after 43 years of employment where he had been a Department Manager in the Press and Shear Department. He served in the US Navy during World War II and was a lifetime member of the American Legion in New Holland. John was a member of the Garden Spot Community Church at Garden Spot Village and a former member of Evangelical United Methodist Church in New Holland. His interests included gardening, boating, hunting and spending time at his summer home at Raystown Lake with his family.
Surviving are his two sons, John W. Edwards of Lancaster, and Richard A. husband of Margaret (Mohler) Edwards of Bowmansville; three grandchildren, Brian Edwards, Katie (Edwards) Deets, and Samuel Edwards and six great grandchildren, Allison, Lucas, Grey, Emily, Jacob, and Geneva. He was preceded in death by siblings, Mildred Geist, Gloria Coldren and A. Fred Edwards.
A Funeral Service will be held on Tuesday, February 15, at 10:00 A.M. at the Chapel at Garden Spot Village, 433 S. Kinzer Avenue, New Holland, with Chaplain Chet Yoder officiating. Interment in the Terre Hill Cemetery. Friends may call at the Chapel at Garden Spot Village on Tuesday from 9:00 A.M. until the time of the service.