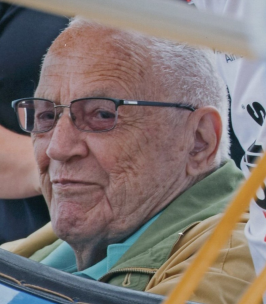 J. William “Bill” Seitzinger, 97, of New Holland, died Thursday, October 6, 2022, at Garden Spot Village. He was preceded in death by Evelyn (Kuntz) Seitzinger, the love of his life. Prior to Evelyn’s death in 2015, they celebrated 67 years of marriage after a courtship of seven years.
Born in Hummelstown, PA, on November 4, 1924, he was the son of the late John W. and Annie (Mack) Seitzinger.
He is survived by two daughters, Gail Posey (Thomas) of Yardley, PA, and Jean Good (R. Brian) of Brownstown, PA; three grandsons, Matthew Posey (Shenoo), Christopher Good, and Nicholas Good (Jacqueline); and three great grandchildren, Oliver Alexander Good, Connor William Posey, and Mary Evelyn Good; as well as many nieces and nephews. He was preceded in death by his brother, Prowell Mack Seitzinger.
After 36 years of service at Sperry New Holland (CNH), Bill retired as the Manufacturing Engineering Manager. After his retirement, he refinished antiques for many customers in the community, and built cabinets and furniture in triplicate, for Evelyn and his girls. Bill also enjoyed traveling with Evelyn and the family.
Bill was a graduate of Hershey High School, Hershey Junior College, and the Georgia Institute of Technology (Georgia Tech). He was a licensed professional industrial engineer and an Able Toastmaster.
A member of Trinity Lutheran Church, New Holland, Bill served as President of the Congregation for many years. He served on the Cemetery Committee, Building Committee, and the Church Council. He was a member of the Society for the Advancement of Management, where he served as Vice-President; he served for 18 years on the New Holland Water and Sewer Authority, chairing it for 10 years; he also served on the Board of Luthercare, as both community member and Chairman; and most recently Trustee of the New Holland Area Historical Society.
Bill’s family would like to extend a special thank you to the staff of Mountain View at Garden Spot Village for the care they gave him.
A Celebration of Life will be held at 11 am on Wednesday, October 12, 2022, at Trinity Lutheran Church, 221 East Main Street, New Holland, PA. Friends and family will be received from 10 am until the time of the service. In lieu of flowers a donation may be made in Bill’s memory to the Memorial Fund of Trinity Lutheran Church. Arrangements by the Groff-High Funeral Home New Holland, PA. Online condolences may be posted at www.groffeckenroth.com