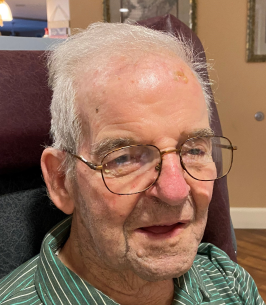 Ira “Bucky” M. Buckwalter Jr., 96, of New Holland passed away on March 19, 2022 as a resident of Garden Spot Village.
Born in Honey Brook, he was the son of the late Ira M. Buckwalter Sr. and Marie C. (Haines) Buckwalter.
He was the loving husband of the late Betty C. (Cook) Buckwalter with whom he married on August 16, 1947 and shared sixty seven loving years of marriage until the time of her passing on June 27, 2014.
Ira proudly served his country as a Corporal in the United States Army during World War II. He was deployed in the Pacific Theater and then in Japan after their surrender.
After the Army, Bucky was employed in the paper mill industry in Downingtown and Philadelphia, ending his career as a shift manager. When he wasn’t working, he loved to travel, making numerous trips to Montana to visit Glenda and her family. He also returned once to Japan. He and Betty enjoyed growing chrysanthemums and were active on both and local and national levels. Bucky enjoyed skiing, both water and snow, and was an avid Philadelphia sports fan. He took great pleasure in caring for and entertaining people. He was a gentle, sweet and funny man.
As active as he was, caring for his daughter Diane took precedence to everything.
Ira recently received his seventy-five-year Service Pin from the Howell Masonic Lodge #405 in Honey Brook, PA.
Ira is survived by his daughters; Glenda “Bucky” B. wife of Craig L. Ballou and Diane E. Buckwalter, granddaughters; Lia S. Ballou wife of Josh M. Hix and Annawyn W. wife of Richard E. Griffin, great grandchildren; Ayda, Asher, Ella, Reece and Silas and a brother-in-law; Joe Lombardi.
In addition to his parents and his wife, he is predeceased by siblings; Betty wife of Raymond Ranck, Dorothy wife of John Overly and Charles Buckwalter.
A Masonic Service and a Memorial Service will be held on Tuesday, March 29, 2022 at 10:00 AM at Garden Spot Village Chapel, 433 S Kinzer Avenue, New Holland PA 17557. Pastor Chet Yoder and Chaplain Karyn Nancarvis will be officiating. A time of visitation will be held after the memorial service.
In lieu of flowers, memorial contributions may be made in Ira’s memory to the Garden Spot Benevolent Fund at the address above or to Hospice and Community Care, 685 Good Drive, Lancaster PA 17604.
Groff High Funeral Home in New Holland is entrusted with the funeral arrangements.