To share your memory on the wall of Gerald Kreider, sign in using one of the following options:

Jerry retired from Ford New Holland after 38 years of service. Following that, he worked for 7 years at Dutch Wonderland, becoming known as “Monorail Jerry”.

He was a member of Ranck’s United Methodist Church, New Holland. He enjoyed playing baseball in his early years and then watching it as he got older, especially the Phillies. An avid fisherman, he enjoyed traveling to Pulaski, NY for salmon. Jerry was also fond of motorcycling and in the past several years could be seen around New Holland on his electric trike.

The family would like to say a special “Thank You” to the staff of Zerbe Sisters for their caring and compassionate care of Jerry.

A life celebration service will be held at a later date to be announced. Should friends desire, memorial contributions may be sent to Zerbe Sisters Nursing Center, 2499 Zerbe Rd., Narvon, PA 17555. The Groff-High Funeral Home, New Holland, is in charge of arrangements. Online condolences may be posted at www.groffeckenroth.com.
Read Less

Receive notifications about information and event scheduling for Gerald

Print
Service will be private at this time.

Donations are being accepted for: Zerbe Retirement Community.

We encourage you to share your most beloved memories of Gerald here, so that the family and other loved ones can always see it. You can upload cherished photographs, or share your favorite stories, and can even comment on those shared by others.

Posted Feb 16, 2021 at 12:38pm
To the Kreider family,
We are truly sad for your loss. Our prayers and thoughts are frequent for those who suffer due to the anguish of losing a loved one. We all experience this loss but the Bible teaches that soon death will end at Revelation 7:15-17.
The scriptures have provided comfort for the loved ones I've lost and show what God's plan is for those who have passed. Take peace and hope that Jehovah provides. The video below gives comfort from the Bible and about the end of death. bit.ly/Deathjworg
Comment Share
Share via:
KC

Posted Feb 15, 2021 at 08:20pm
Hello. My name is Kelly Cummings (Michael's wife). I didn't know Jerry like my husband did but he did accept me like I was one of his buddies. Jerry and Lois welcomed us to their home a few times when they lived in Akron and allowed us to take our engagement photos in their yard. We came over a lot and hung out with their many different types of animals (birds, dogs (Zoe) and many others. Very big animal lover he was and also a Phillies fan. As his health declined we visited them when they lived in New Holland. I remember hearing their big parrot and all the other birds they had in different rooms. Zoe was also there and another dog (I'm sorry I can't remember names). Jerry was the monorail guy. He was an awesome guy and Michael and I will definitely miss him alot. He was very funny and very nice to us. Thank you Jerry for being a very great guy.

Posted Feb 13, 2021 at 09:13pm
I remember Jerry from working with him at Dutch Wonderland Family Amusement Park he was a wonderful guy to work with he was also a awesome friend we told turns running the Monorail when we were up in the station together sometimes we had two monorails running and I remember him saying Car 3 leaving the station over and I would say car 4 leaving over. He had a big heart he was a great guy to be friends with all of the Dutch Wonderland Crew Loved Jerry even the ride supervisors got a kick on how he sound on the radio. I am going to miss you Jerry fly high with the Angels and be careful taking other angels to Heaven with you on the Monorail Jerry Rest In Peace forever in our hearts.
Comment Share
Share via: 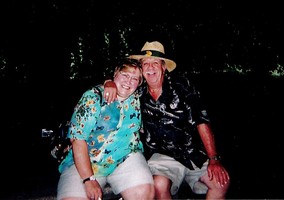