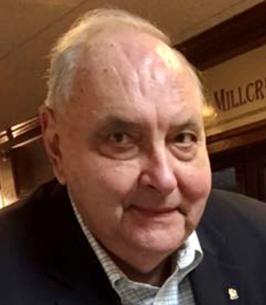 George W. Dissinger, 83, of New Holland, passed away on Sunday, October 30, 2022 at Garden Spot Village following a lengthy illness.
He was married 54 years to the late Anne Marie High Dissinger who died in 2018. Born in New Holland, he was the son of the late George L. and Eleanor Wanner Dissinger.
George was a 1957 graduate of New Holland High School. He was the retired owner of Gabsco, a plumbing and electrical supply company in Blue Ball. George was a member of Trinity Lutheran Church in New Holland. He was a 40 year member of Liberty Fire Co. and a life member of the Lancaster County Fireman’s Association. George was proud of his Masonic memberships and was a member of the Howell Lodge #405 F.&A.M., Lancaster Lodge of Perfection, Reading Consistory, Rajah Shrine, was past president of the James Buchanan Chapter of the High Twelve, and the Lancaster County Shrine Club. He was interested in history and was a Life Member of the New Holland Historical Society. His other interests included antique and classic cars, old wooden boats and the Chesapeake Bay.
Surviving are two sons, Mitchell D. husband of Gina Black Dissinger of New Holland, and Mark A. husband of Tracy Day Dissinger of Milford, DE; a granddaughter, Elizabeth “Libby” wife of Christopher Tenbusch, Jr.; step grandchildren, Danielle E. wife of Jordan L. Landis and Justin R. husband of Allison E. Weaver; and step great grandchildren, Harper O. Landis, Maevyn V. Landis, and Elisha M. Weaver.
A Funeral Service will be held on Thursday, November 3, at 1:00 P.M. at the Groff High Funeral Home, 145 W. Main St., New Holland, PA with the Rev. Chet Yoder officiating. A viewing will be held at the funeral home on Thursday from 11:00 A.M. until the time of the service. A Masonic Service will be conducted by the Howell Lodge #405 F.&A.M. just prior to the start of the funeral service. Interment in St. Stephens Cemetery, New Holland. In lieu of flowers, contributions in George’s memory may be made to the Lancaster County Fireman’s Association or the New Holland Area Historical Society.