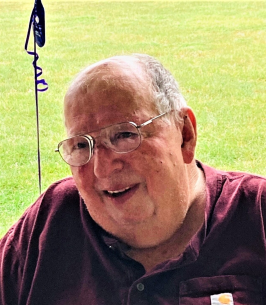 Eugene S. Eberly, 86, a resident of Garden Spot Village, 433 S. Kinzer Avenue, New Holland, passed away early Saturday morning following several years of declining health.
He was married 23 years to Thelma Horst Eberly. His first wife, Nora Beiler Eberly passed away in 1996. Born in Leola, he was the son of the late Melvin N. and Celestine Sauder Eberly.
Eugene was a hog and beef cattle farmer for many years in New Holland, also doing custom combining in the local area. He enjoyed restoring John Deere Tractors as well as other pieces of farm equipment. Eugene enjoyed spending time with family and friends at his cabin in Belleville.
He was a long-time faithful member of Groffdale Mennonite Church, serving in many capacities over the years. His Christian faith was always important to him. He always assured his family of his continual prayers and concerns for all of them.
Surviving are four children, Judy wife of Ed Ricca of Weyers Cave, VA, Marilyn wife of Clair Siegrist of East Earl, Rodney husband of Marilyn Petersheim Eberly of New Holland, and Gwen wife of Rodney Shumaker of Marietta; three step children, Yvonne wife of Keith Nyce of Gordonville, Gary husband of Renee Mumma Groff of Annville, and Kim wife of Craig Stoltzfus of Parkesburg; 18 grandchildren, 5 great grandchildren; a brother, Clair S. husband of Arlene Beam Eberly of New Holland, and a sister, Ruth Ann wife of Carl Gingrich of New Holland. He was preceded in death by a sister, Doris Eberly.
A Funeral Service will be held on Friday, October 28, at 11:00 A.M. at the Groffdale Mennonite Church, 168 N. Groffdale Road, Leola, PA with Pastor’s Tom Eshleman and Keith Nyce officiating. Interment in the adjoining church cemetery. A viewing will be held on Thursday evening from 6:00 to 8:00 PM in the Garden Towers at Garden Spot Village, and also on Friday from 10:00 A.M. until the time of the service at the Groffdale Mennonite Church. In lieu of flowers, contributions in his memory may be made to Global Disciples, 315 W. James St. #202, Lancaster, PA 17603.