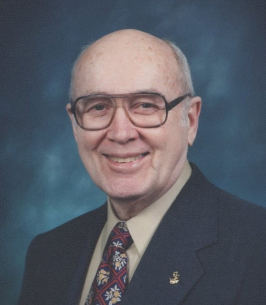 Donald William Mackie of New Holland, PA. went home to be with the Lord on October 14, 2022 at the age of 99.
He was born in Des Moines, Iowa on August 23,1923, to the late Thomas and Esther (Cooper) Mackie and is survived by his beloved wife of 75 years, Betty (Benzing) Mackie, daughter, Brooke Mackie-Ketcham (Wendell), son, David Mackie (Tina), brother Thomas A. Mackie (Margaret), six grandchildren, Keith Ketcham (Becky), Brittany Ketcham, Michelle Ketcham, James Ketcham, Christopher Mackie (Sarah), and Brian Mackie (Caitlin) and six great grandchildren, Anthony Ketcham, Laina Ketcham, Wyatt Ketcham, Finn Mackie, Kade Mackie, and Ava Mackie.
Donald graduated from East High School in Des Moines, Iowa in June 1941 and enlisted in the US Navy in October 1942. During WWII he served aboard the USS Porterfield (DD-682) and was honorably discharged in January 1946 as a Chief Electronic Technician . Donald received a B.S degree in Electrical Engineering at Iowa State University in June 1949. From August 1950 to June 1953, his Army reservist unit was activated for the Korean War. He was a 1st Lieutenant, 5th Army reserve, in the 303rd Signal Service Battalion.
Donald was employed at AT&T Corporation for 38 years, working in many departments and divisions including Long Lines, Operations, Engineering, Sales, Marketing, in locations across the country.
He was a devout believer and follower of his Lord, Jesus Christ, and was a member of many different denominations, including United Methodist, United Presbyterian, Christian & Missionary Alliance, Conservative Baptist, and the Mennonite Church. His passion was Biblical teaching, theology, scholarship and outreach. He was active in church and community life by serving on boards, committees, leading Bible studies, and teaching adult Sunday school classes.
He was a Life Member of the Telephone Pioneers of America, Tin Can Sailors, and the American Legion Conestoga Post #662. He was the only resident at Garden Spot Village to serve in both the US Navy and US Army in times of war.
A private service will be held at Weaverland Mennonite Church. In lieu of flowers, memorial contributions in his name can be made to the Garden Spot Village Benevolent Fund, 433 South Kinzer Ave., New Holland, PA., 17557 or to Weaverland Church, 210 Weaverland Valley Rd., East Earl, PA, 17519.