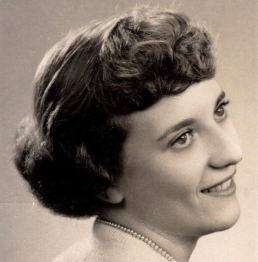 Jackie was born and raised in West Chester, the darling daughter of the late John R. and Thelma H. (Alexander) Taylor.

She was the loving wife of the late Theodore (Ted) R. Laverty, whom she married on August 31, 1957. Ted and Jackie shared sixty-five years of marriage until the time of his passing on September 18, 2022. Their unfailing love for each other has been an inspiration to all who were fortunate to know them.

Jackie was a member of St. Thomas Episcopal Church in Morgantown and was employed as a teacher’s aide for the Downingtown School District for twenty-five years. She enjoyed reading, adding finishing touches to Ted’s wood-working projects, entertaining family, taking her children and grandchildren on vacations, being a homemaker and a Girl Scout leader (when her daughters were young), taking care of Ted and their pets (they both especially loved dogs), and watching the Reading Phillies and Philadelphia Phillies.

This beautiful, sweet, and sassy lady is survived by her loving children, Vicki L. Trego and her husband Kenneth Trego; Cheryl L. Johnston and her husband Stanley Johnston; and Theodore (Ted) R. Laverty Jr. and his wife Diane Laverty. In addition to Jackie’s brother, William (Bill) Taylor, his wife Carol Taylor, and many nieces and nephews, also surviving are her ten grandchildren and nineteen great-grandchildren who have been blessed beyond measure to be able to call her “Grandmom.”

In addition to her husband and her parents, she was preceded in death by her brother, John “Rich” R. Taylor and his wife, Lana Taylor.

A memorial service for both Jackie and Ted will be held on Saturday, December 10, 2022 at 3:00 PM at St. Thomas Episcopal Church, 6251 Morgantown Road, Morgantown PA 19543. There will be a time of visitation held for one hour prior to the time of service. Interment will be held at a later date in Green Mount Cemetery.

Groff High Funeral Home in New Holland is entrusted with the funeral arrangements. Online condolences may be made to www.groffeckenroth.com