To share your memory on the wall of Charles Christian \"Kris\" Groff, sign in using one of the following options:

To send flowers to the family or plant a tree in memory of Charles Christian "Kris" Groff, please visit our Heartfelt Sympathies Store.

We encourage you to share your most beloved memories of Charles Christian "Kris" here, so that the family and other loved ones can always see it. You can upload cherished photographs, or share your favorite stories, and can even comment on those shared by others.

Posted Dec 02, 2020 at 07:42pm
Kris and I worked together when I managed the Penn Fuel Propane Gas plant in New Holland, 2005-2009. Kris started in the gas business in 1973. I stated with Suburban Propane in 1972. We grew up and old working in an ever changing fuel industry. I will miss his knowledge, his excitement as he talked about photography, and our interests in similar music. We were a family at Penn Fuel Propane. GOD Bless, and Kris, may you rest in peace.

Posted Nov 30, 2020 at 04:52pm
It was indeed a pleasure to grow up on State Street with Kris and Eric and Nancy and Tom-they were more like siblings than cousins or neighbors. Holidays together, summers at Mt. Gretna-shared experiences from a simpler time. Kris was a wonderful
photographer. He was my wedding photographer, too. I send my heartfelt sympathy to Eric and the family.
Bev Groff Ament
Comment Share
Share via:
DB

Posted Nov 30, 2020 at 02:53pm
So sorry to hear about Kris. He was my photographer for my wedding back in 1975!
My sympathies go out to Kris's family and his brother Eric.
Donna Loht Burkhart
Comment Share
Share via:
NH

Posted Nov 30, 2020 at 11:54am
It was a blessing to grow up on State Street with the Parke and Carl Groff families as neighbors. Each member of those families holds a special place in my heart. My sincere sympathy to Kris' children/grandchildren and Eric.
Comment Share
Share via:
BW 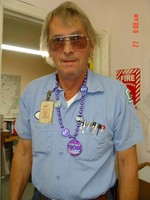